Thank you for your support! After sailing through the Greenlight Triangle, we are getting ready for one of the most challenging stages, CompliKATed release. 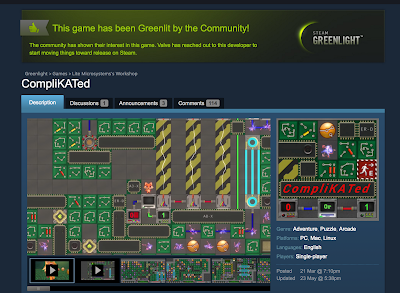 So far, we haven't been sitting with our hands on our laps and we managed to balance intense daily jobs and CompliKATed development for almost an year, so we'll stick with the announced release date: autumn 2017. Exhaustion kicks in from time to time, the all present uninvited guest. Panda eyes are quite fashionable, though.

Regarding the traditional #greenlight wisdom, that became accustomed among game devs (after your game is greenlit, you come back to the community to share what you have or have not learned), we are now more experienced, but no wiser. We haven't learned anything that might shed some light on the greenlight process, we just became familiar with it.

Instead we compiled a list of already public advices, that we followed:

We'd like to thank everyone who voted, we're grateful for all public greenlight advices, we wish all developers good luck and we want to make a promise to all gamers that we'll deliver a fun, but hard to beat game!
Labels: greenlit